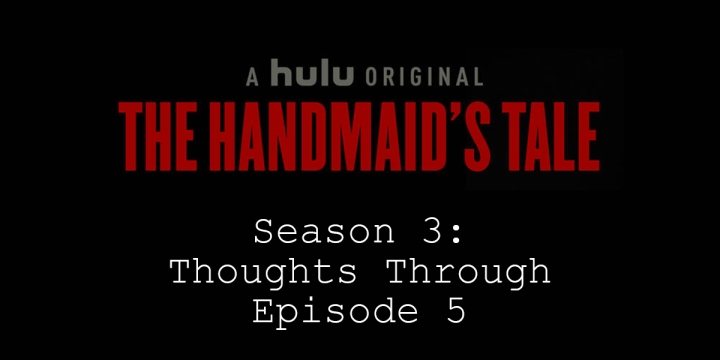 Howdy y’all people out on the interwebs.

Eduardo and I don’t watch much as far as new TV goes. We tend to watch the same four shows on mega repeat. We’ve tried to watch some shows but we tend to lose interest a few episodes in and put on one of our old favorites (that’s a fun post idea, what shows do you watch on repeat?).

However, there are a few new shows that we are keeping up with even as episodes are released on a weekly basis. Shameless is the first one that comes to mind, but a close second is The Handmaid’s Tale. We anxiously awaited the beginning of season 3 and to be completely honest, I’m feeling a bit ho-hum about it.

This post is going to contain spoilers so if you don’t want to know what happens, click off. I’m not going to intentionally give everything away but I feel like it’s hard to share why I’m not feeling excited by this season without discussing some major plot points.

First, Commander Lawrence… (I was serious, if you don’t want spoilers don’t continue reading, I’ll insert a photo warning here so if you scroll past it, sorry not sorry)

I have some gripes about TV shows that use this tactic of intentionally leaving a character ambiguous. Usually, they do it with the intention of tricking the viewer, you think he’s the bad guy, but he does some stuff that makes it seem like he might be a good guy, and then *bang* he’s actually the serial killer and you’re left rewatching to point out all the little signs that he was actually the bad guy all along. I’m okay with some shows doing this. However, Commander Lawrence is a poor example of “is he good or is he bad,” in my opinion.

Obviously, he helped create this society. He’s evil. However, he helps Emily. We have no indication that he’s helped other handmaid’s like this. He said it himself, he saved her because of her intelligence, not because he values human life. And then the whole thing with the underground Martha railroad happened and he’s painted to be the bad guy again. Or maybe the misunderstood bad guy? The “You can’t help them all, but you can help a few, take what you can get” attitude came across very out of character to me. And then, he’s the good guy again with the mix tapes and how much it would appear that he loves his wife.

(Also, what’s up with his wife? Did she go mental because of what he created? Then why is she still there? Why does she play along with the whole charade? Because she loves him? Until they played a mixtape, she admittedly thought him a monster. Was he selfishly keeping her under his roof because he ‘loves her’ when he could have helped her escape the society that’s driving her batty? I’m sure we’ll get answers later but I don’t think they’ll satisfy all the loose ends.)

I feel like maybe they didn’t know where his character was going to go, so they put him into some ambiguous situations and kind of waded through a couple of episodes, testing him out as a character.

Same with Aunt Lydia. She should have just died. She’s not serving a purpose in these episodes. I’m no longer afraid of her. It would be so incredibly easy for any one of them to get the drop on her. And you want me to believe that all of a sudden they all feel bad for her and aren’t doing anything to fight her? I feel like the handmaid’s also don’t feel threatened by her anymore so maybe Lydia’s there to serve as a symbol of Gilead’s decreasing power while the handmaid’s are gaining power? And if that’s the only purpose she serves, I’m tired of her. Who’s the new aunt who would make the girls remember their place? You’re telling me that Aunt Lydia is the only one with a penchant for punishment against sinners? Bull.

I’m enjoying seeing more of the refugees in Canada. However, I’m not sure how I feel about Emily and her wife (I don’t even remember her name). I love the relationship with her son, love that she doesn’t quite know what to do or say and that she didn’t just magically become a perfect mother. Emily and her wife will obviously eventually have to discuss Gilead and what happened but I have an inkling of a feeling that we aren’t going to get to see that. Also, I have a question about all these refugees in Canada, none of them talk about what happened in Gilead? Canada’s not going after Gilead? Why not? Maybe I missed that part. Eduardo suggested that maybe it’s because Canada thinks Gilead has allies that would cause a WWIII… Maybe.

The last thing that’s really irking me is how they completely did away with Nick. Poof. He’s gone. And she doesn’t care. I understand that because of his involvement with Emily’s escape and his threats to Waterford he couldn’t exactly stick around but I feel like that could have done so much better. I have no idea how I would have done it but I’m hoping his arc isn’t over yet.

I don’t quite know how I feel about Serena Joy, I love bits and pieces of her. If she was my friend I would just want to give her a big hug and let her know that she is loved. But the end of the last episode (where they’re setting up the propaganda BS) pissed me off. What’s her problem? She has literally nothing keeping her in Gilead except this misplaced sense of religion and she should have run when given the chance, the first time.

Tomorrow there’s going to be a new episode and I hope that something good happens. The preview looks promising. But I’m not holding my breath for anything epic this season. What about you? What do you think so far?

2020, I don’t know quite what to do with you yet but I’m sure we’ll figure it out 😘👀 • • • #getglam#tatibeauty#texturedneutrals#selftimer#2020#makeup
#goldenhour #glowing
I’m ending #mymugproject with a tribute to our new home in Texas! 🥰 2019, you were a real one, but I’m happy to see you go. I appreciate everything I learned this year, and I value all of the experiences I had, the good, the bad, and the terrible 😬 I can’t wait to see what 2020 has in store for us! I’m so excited to start some new projects as well as revisit a few from the past! Cheers to a fresh start this year 😘
Hey, did we mention? We bought a house! 🏠💙 I still have a hard time believing it myself. We’ve had the house since mid-October and I still feel like I’m living in an AirBnb 😮 The journey of 2019 has been a wild one but there’s no one else I’d rather have by my side, @eduardosantanamedia I love you more! (Clearly, the dogs are also very happy with the move 🐾)
We had In-N-Out for the first time last week... Texas might disown us but it was 100% better than Whataburger, I’m not sorry about it! 🍔🍟 also, clearly I’m practicing my flatlay photos/editing and I’m really happy with the way this one came out. You can’t get better at something if you don’t practice so I’m really just out here doing things that make me happy. • • • #innout#notatexasnative#burger#stilllife#flatlay#lifestyle#2019#redisaprimarycolor
Greetings from my desk, I don’t actually wish you were here though ☕️☀️ • • • #mymugproject#target#2019#wishyouwerehere#mydesk#coffee#goodmorning#lifestyle
Did you eat your breakfast this morning? ☕️🍓 • • • #eatbreakfast#yogurt#granola#flatlay#stilllife#lifestyle#icedcoffee#supportlocal#lifebeginsattheendofyourcomfortzone#dontaskhowmanypicturesitooktomakethiswork#2019
Everyone’s posting their cute Halloween pics... this year we dressed up as a house that doesn’t celebrate Halloween. It broke my heart to write this note but luckily our neighborhood doesn’t get many trick-or-treaters... looking forward to a better Halloween next year 🎃
Hey Florida, thanks for the fall vibes but I’m still drinking iced coffee 🍁☕️ • • • #mymugproject#pink#2019#florida#fallvibes#coffee#mug#target
Follow Team Santana on WordPress.com