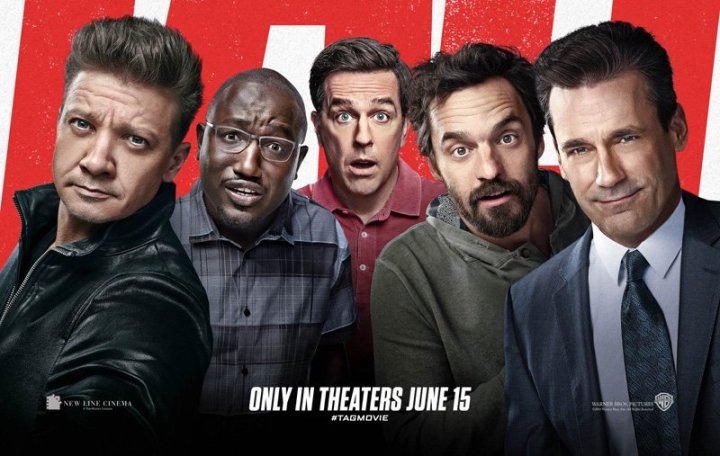 Tag is a childhood game that I don’t exactly relate with, I can’t remember ever playing tag with my cousins or my siblings, or even with the neighborhood group of kids. We played other games, like lava and capture the flag.

We originally saw the trailer for this movie when we saw Deadpool 2 and we looked at each other, kind of chuckled, and agreed that we probably wouldn’t see the movie in theaters. I was offered prescreening tickets through a movie ticket service and we both had the evening away from obligations so we went and…

We were not disappointed. This movie was laugh out loud hilarious. I loved every character. We looked up the movie a little before we went and agreed that the cast is top-notch. It does star Jake Johnson who I always confuse with Charlie Day, you can read more about actors that I commonly mix up by clicking here. I didn’t know who Jeremy Renner was before seeing this, I’m not a super hero movie person. Ed Helms makes me laugh in pretty much everything I’ve seen him in. And, omg, Isla Fisher, killed me.

Sable, played by Hannibal Buress, was by far my favorite character, he provided obvious narration. The ‘we’re all thinking it’ lines came from him, and his delivery was spot on every time.

The screening we attended had an absolutely packed theater and there wasn’t a single joke that didn’t land with the crowd. There were a few sexual jokes but they didn’t overpower the entire film which I really appreciated.

There were some loose ends that needed tying up but when the movie ended I didn’t feel lost. I wasn’t demanding to know what happened with so and so or where did that character even go!

At the end of the day, this movie is a bunch of really great one liners. I compared it to Horrible Bosses in that the whole story line isn’t exactly super funny or interesting but the individual moments are hilarious and memorable.

Honestly, I would rather watch Horrible Bosses or We’re the Millers than Tag but it was worth the first viewing.

Do you like comedies that have one big punch line, or a comedy that keeps you laughing throughout with a bunch of one liners?

Until next time – Xx