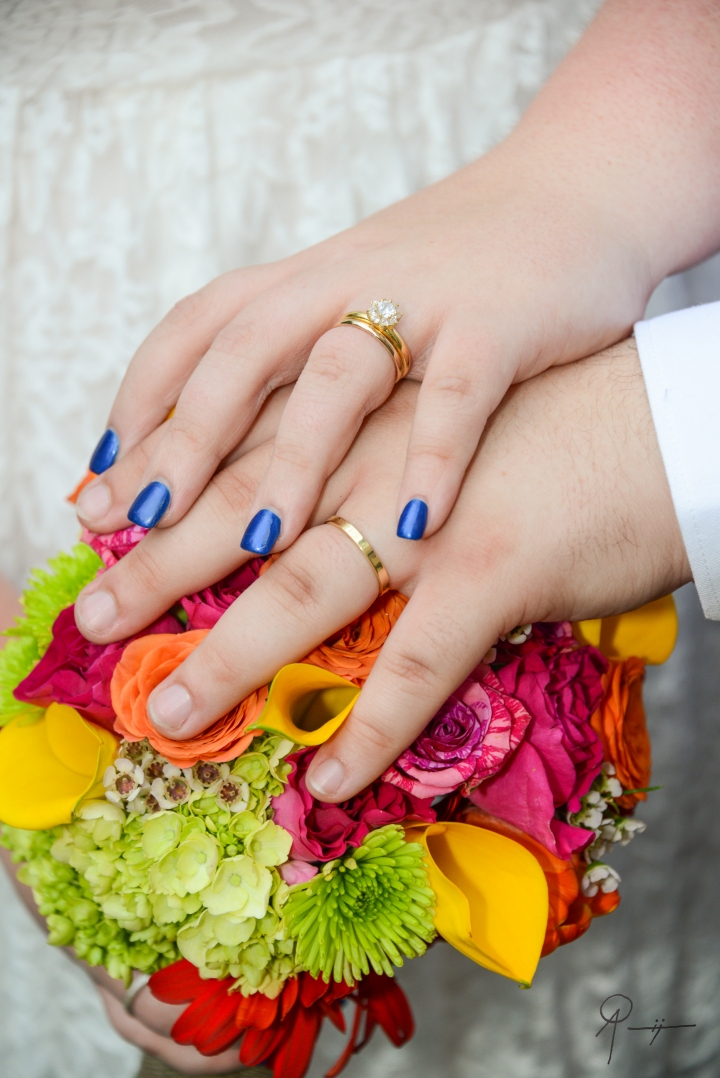 Easily, one of the most commonly asked questions I receive. And easily the question I had the hardest time answering.

Since getting married in October everyone asks, “How’s married life?” when they see me for the first time since the wedding. I’m always taken aback: number one, I wouldn’t ask people how married life is, and number two, it’s not different, at all.

Eduardo and I have been together for our entire adult life. We were high school sweethearts. He was my best friend in middle school even though I made fun of his braces and acne.

We’ve lived together the past three years. We were dating for the past seven years. Marriage, for us, was inevitable.

Whenever people ask me, “How’s married life?” I don’t know what kind of answer they’re looking for… I wear three rings now instead of one? The commitment-phobe inside of me feels a little more trapped? We filed our taxes together? I call him my husband instead of my boyfriend?

For awhile I thought I was broken, like is marriage supposed to change your whole outlook on life and love and relationships? So I started looking at my daily life and asking myself how married life is.

Before we got married, if I got mad over something stupid I would convince myself that I was in the wrong and that overreacting would push him away. Even though I knew he wouldn’t just leave me without expressing concerns for our relationship, I felt like I was constantly living on an edge and one day he would come home and tell me we needed to break up. I would let annoying behaviors slide, again because if I overreacted I thought I would push him away.

Before we got married, most of my actions were a result of the thought, what if he breaks up with me? Now, that’s a ridiculous thought process, Eduardo is one of the most honest people I have ever met. He would never just break up with me, not without trying to tell me why he doesn’t want to be with me. Those thoughts, the constant worrying that I wasn’t good enough, were caused by my own insecurities. I also lived under the impression that if I expressed to him my insecurities he would leave me and write me off as an overemotional girl.

Now that we’re married, when I get mad at him over something I consider stupid, I tell him: “Hey, Eduardo, you know it really bothers me when you put the stuff that was on the bed on my vanity at night. This bothers me because when I get up in the morning and go to do my makeup I have to dig through clothes and shoes and laptops to get to my stuff.” And rarely does the behavior change right away. But when he does it again the next day I can say, “So remember, I told you yesterday that this really bothers me? Could you not do this tomorrow.” And when the behavior still doesn’t change I wait for his day off, sit him at my vanity and say, “Could you find the nail clippers?” And then he has to dig through all the crap he piled up the night before to find them. Usually it’s that moment that I see the pieces click together and he realizes why I’m mad that there are constantly things piled on my vanity.

I tell him what makes me upset even if I might be overreacting, I don’t want to become complacent until one day I snap and the hamper of clean clothes pushes me over the edge. I would rather just tell him why I’m annoyed before it gets to the point where I’m mad. Because being mad, for me, usually leads to being upset and self-blame.

Now that we’re married, it’s rare for me to think that I’m not good enough for him. I don’t think that marriage is the sole reason I feel more secure in our relationship, but it was a big part of it. I don’t feel pressured to keep things to myself for the fear of him leaving me. Maybe I feel like this because I live under the impression that it would be harder to get out of a marriage than just a relationship.

It’s incredible. Thanks for asking.

Eduardo takes cute pictures of the dogs and it makes me really happy 🥰
The couple that skates together, stays together 🛹
#quarantinehair
I understand, that I will never understand. However, I stand with you. #blackouttuesday
I’ve written and deleted post after post about what’s going on... I still don’t know exactly what to say... but I can’t sit idly by and watch the narrative shift from “look at these protests, fighting for justice!” to “the riots have gotten so out of hand.” Black lives matter. If you don’t agree, if “I can’t breathe” has not haunted you these past several days, if you think this is something you can ignore... Listen to those who are hurting. Educate yourself. Stand between those who hate and those who are wrongfully hated. Look past your ignorant bubble of complacency and consider those are are crying out for help.
Support artists by commissioning illustrations of your favorite selfies ✌🏻
Same look, different lighting. ✌🏻✨ I hope you’re all being safe and healthy.
Social-Distancing: Day 14
Alexa, play Pink by Two Feet 💕🎵