If you know anything about Jacksonville and hurricanes then you know that historically the weatherman will go on and on about how the hurricane is coming towards Jacksonville, they’re going to get hit and it’s going to be really bad and then a few days before the hurricane is supposed to hit the path changes and Jacksonville is always in the clear. Unfortunately, this didn’t happen with Hurricane Matthew.

Haiti and Cuba were completely devastated by this natural disaster. Fortunately, Eduardo’s family lives on the opposite coast of Cuba and they only experienced some residual rain.

We were really torn about whether or not we should evacuate, the argument for staying was that my parents have a generator, both of our families were staying, and the cost of evacuating was pretty steep… There was only one hotel with available rooms in Atlanta, Georgia on Thursday afternoon, while we were debating leaving. We ultimately ended up staying, we’re not in a defined evacuation zone and clogging up the road would cause more of a hassle to people who live at the beaches who really needed to leave. 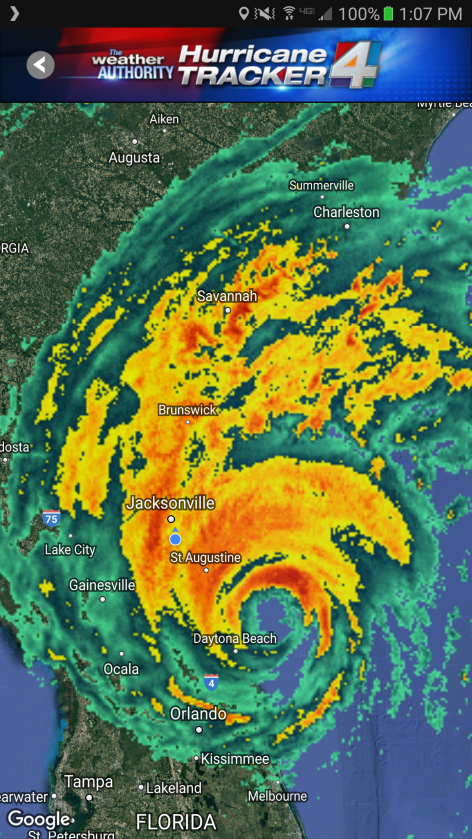 The storm itself really wasn’t bad, I have anxiety when there’s really loud rain, wind, or thunder and I was able to sleep through most of the noise. Lucy was also super great during the whole two days. Every time we took her out we kept her on her leash, even in the backyard, just in case something happened.

While we were preparing for potential power outages and flooding we drove to several different stores, almost all of them were completely out of bread, water, and chips (oddly enough). And booze, I think there were less cases of beers available than on superbowl sunday. 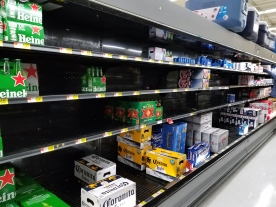 We were extremely fortunate, we live about twenty minutes inland from the beaches and even though we were told that we didn’t have to evacuate trees in our neighborhood went down, roofs collapsed, cars were damaged, power went out in various parts of the city… We were so very lucky this time around. We didn’t even lose power.

On Saturday we went to survey the damage in our area. Mostly just trees down and a few roads were blocked. Jacksonville Beach had much more damage and we definitely felt the reality that our city could have been completely devastated by this natural disaster. At least they’re saying that the next one won’t be for another hundred years…

One thought on “Hurricane Matthew : Storytime”